Coming back from the USA was hard as I landed in Paris at 1PM, after a sleepless night sitting next to a snoring passenger, and going straight to my god-daughter’s 1st Birthday afternoon party!

Of course I wouldn’t have missed it for the world, and it fact, it seemed as if I had missed too many events of her growth already. I had been away a few weeks and she had the time to grow curly black hair and start walking! Children really do grow “so” fast! I also had a little time to find the perfect gift to initiate her to the essential concepts of unicorns and sequins!

After a busy but fun Sunday afternoon, working on Monday was certainly the hardest part, I could barely concentrate and knew  beforehand that would have so many things to do and people to see all week I would not have time to recover. I was correct.

Friday came at last and all the family members with who I had spent my holidays with in the US were in Paris to celebrate another cousin’s wedding! Actually it had been comforting to know that we were all going to see each other again just a few days apart for another big event (I actually do not know if it was planned on purpose!).

Anyways, on Friday evening we all attended the “Welcome dinner” at the Fermette Marbeuf (translated “Marbeuf farm”), a unique place near the Champs-Elysées, offering an authentic setting with its authentic Art Nouveau decor around a traditional home cooking.

Also, this time, and for the first time, I had a plus one. Without elaborating on the subject I will only say that it was the most stressful night and also the sweetest. I was thrilled for the audacity of introducing someone to my whole family and at the same time I could not believe things were & are getting serious.

It was an amazing evening in one delicious and elegant restaurant in Paris, followed by an even bigger evening on Saturday. And because apparently this year no two weddings are going to look-alike, I had the chance to attend my first ever Jewish celebration at the Shangri-La Hotel, one of the fanciest hotels in Paris. 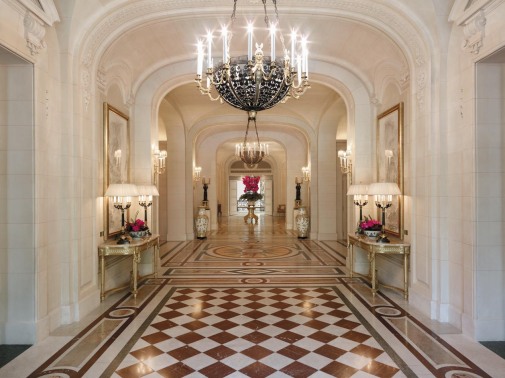 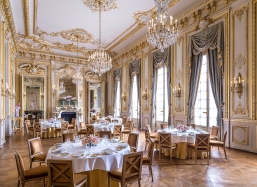 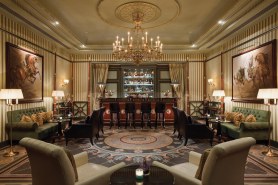 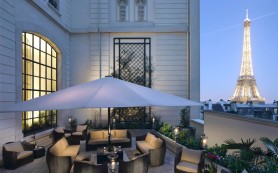 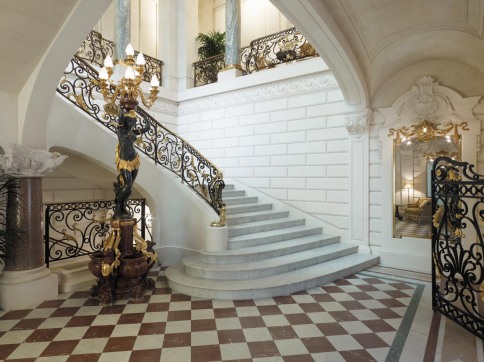 Besides the luxurious location which included a refreshment on the terrace  with a magnificent view of the Tour Eiffel, I was also enchanted by the rituals and the chanting which, although unfamiliar, reminded me of an old oriental tradition that touched us to our chore. However I read only later that week the meaning of the different steps.

Before the wedding ceremony, the chatan (groom) agrees to be bound by the terms of the ketubah, or marriage contract, in the presence of two witnesses, whereupon the witnesses sign the ketubah. The ketubah details the obligations of the groom to the kallah (bride), among which are food, clothing, and marital relations. This document has the standing of a legally binding agreement. It is often written as an illuminated manuscript that is framed and later displayed at home. This part was more intimate and only the parents, the witnesses, the groomsmen and bridesmaids were invited.

Afterword, during the wedding ceremony, the couple stands under the chuppah (in Hebrew: חוּפָּה‎‎), a canopy consisting of a cloth stretched over four poles symbolizing the home that the couple will build together, while the rabbi reads the signed ketubah aloud, usually in the Aramaic original, but sometimes in translation.

In many Orthodox Jewish communities, the groom is escorted to the chuppah by the two fathers and the bride by the two mothers, but less traditional brides and grooms are escorted by their own parents, as it was for this particular wedding.

The bride traditionally walks around the groom three, or seven times in this case, when she arrives at the Chuppah.  Seven circuits derives from the Biblical concept that seven denotes perfection or completeness.

Finally, after the presentation of the rings and the final blessings the groom breaks a glass, crushing it with his right foot, and the guests shout “Mazel tov!” (apparently nowadays a lightbulb can substitute a glass as it is thinner and more easily broken, and it makes a louder popping sound).

However, once you signed the ketubah, raised the huppah, exchanged rings, and stomped on the glass, the wedding is not over yet! There are a few more rituals left to make your reception a true simcha (joyous celebration). In fact, no Jewish wedding is complete without the Hora, or chair dance. In this tradition, a few strong and brave guests (in this case my brother and cousins) hoist the bride and groom high above the crowd on chairs to the infectious sounds of “Hava Nagila”. Friends and family dance around in an ecstatic circle as the elevated couple tries not to look (or fall) down (which was not that easy of a task especially for the bride).

Finally the evening ended with a lot of dancing and cake eating until late night. The next day, when I could have actually rested, we went for a second celebration of my God-daughter’s 1st Birthday, this time with the closest family. After the short night I woke up just in time for the afternoon tea (replace tea with Champaign).

This never-ending week was finally closed by a(nother) relaxing evening along the Seine, a glass of Rosé in one hand and some nice pizza in the other… 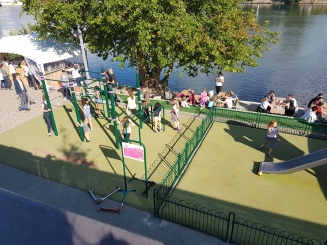 …until I received a text message from my cousins inviting us to the final reunion before their departure and to have one last bite of the wedding cakes. Long story short the next Monday I was in bed at 9PM.